Yogi Bear is a fictional bear who appears in animated cartoons created by Hanna-Barbera Productions. He made his debut in 1958 as a supporting character in The Huckleberry Hound Show. Yogi Bear was the first breakout character created by Hanna-Barbera, and was eventually more popular than Huckleberry Hound. In January 1961, he was given his own show, The Yogi Bear Show, sponsored by Kellogg’s, which included the segments Snagglepuss and Yakky Doodle. Hokey Wolf replaced his segment on The Huckleberry Hound Show. A musical animated feature film, Hey There, It’s Yogi Bear!, was produced in 1964. Yogi was one of several Hanna-Barbera characters to have a collar. This allowed animators to keep his body static, redrawing only his head in each frame when he spoke. This reduced the number of drawings needed for a seven-minute cartoon from around 14,000 to around 2,000.

Hey There, It’s Yogi Bear! is a 1964 American animated feature film produced by Hanna-Barbera Productions and released by Columbia Pictures. The film stars the voices of Daws Butler, Don Messick, Julie Bennett, and Mel Blanc. Based upon Hanna-Barbera’s syndicated animated television show The Yogi Bear Show, Hey There, It’s Yogi Bear! was the first theatrical feature produced by Hanna-Barbera, and the first feature-length theatrical animated film based on a television program.

It starts with Boo-Boo Bear waking up to Spring. He wakes up Yogi Bear, but he only cares about finding food to eat. Cindy Bear however tries to woo Yogi into marrying her. Time after time Yogi tries to trick people, but Ranger Smith outsmarts him at everything. Yogi gets angry and decides to transfer out of Jellystone National park. Ranger Smith is first reluctant to do so until Yogi tries to make a deal. So Smith prepares Yogi to be sent over to the San Diego Zoo along with an identification tag. Yogi first says goodbye to everything, but tricks another bear named Cornbone into going to California instead of him. Soon Yogi is stealing food from all over the park, but Smith believes it to be another bear. He threatens whoever does it to be sent to the zoo. Cindy, believing Yogi to be at the zoo, angers Smith into sending Cindy away. However, The San Diego Zoo didn’t need anymore bears, and sent Cindy to the St. Louis Zoo without telling her. But on the train she finds out from the other bears that she’s
being sent to St. Louis. She then cries herself to sleep. In the middle of the night, Cindy falls out of the train and becomes lost. Next, a circus who is losing customers is thinking about quiting unless they can find a good act. Soon their dog runs off and scares Cindy into walking on the telephone wires, prompting the circus to use it as their new act. Soon Yogi and Boo-Boo escape from Jellystone and try to bring Cindy home. They break her out of the circus and try to get back to Jellystone before anybody finds out, while Ranger Smith decides to let them find their way home by themselves so not to get fired. 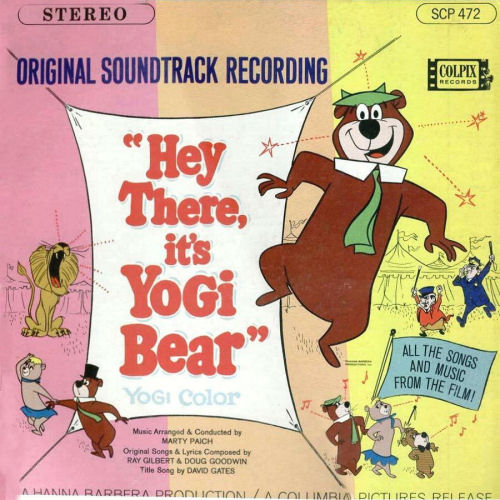